I made enquiries to take part in the festival early in the new year.  The information returned to me was sketchy and continued to be so until after our arrival – totally different to Stratford. 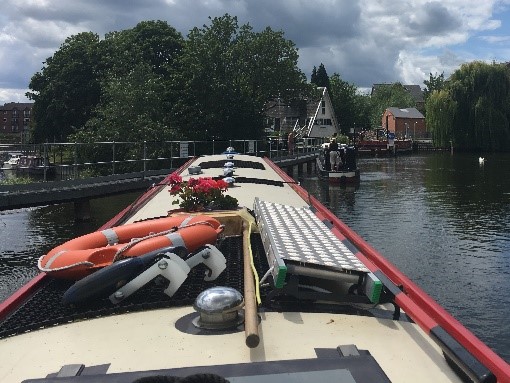 After just passing the test to negotiate the weir and lock (thanks to advice from previous contestants) we found our reserved berths and ended up in a 5 & 4 abreast situation close to the main bridge, normally frequented by some noisy alcoholics – no match for us though!

Seven 4 C’s boats (The Great Escape, Doinmein, Indecision, Now Then, Aquarigo, Lucky B, Dabbling) plus two prospective new member/thrill seekers on Corriander* and ex members on Lamprey made up our little community on the river.  There were also a couple of wide beam boats, a few other narrowboats and a lot of yoghurt pots, er sorry – Cruisers present.  The festival theme was Disney Films.

The setting was lovely with grassy gardens separated by riverside walk.  We were given a large envelope of some things we wish we had known beforehand, together with a number of menus offering discounts and vouchers for unlimited money off at the bar.  The weather was also rather good.

Friday night kicked off, for boaters, with a loudish band playing in close proximity to us.  Somewhat entertaining at the start they got worse rather than better and we lost count of how many times they ended up murdering “Whisky in the Jar?”  (Don’t call us …..).  The Saturday acts were much better.

Evesham Festival was really only for one day, but the beautiful river is the main focus and we were treated to displays by the Newfoundland Dogs, Severn Area Rescue Association, Build a Raft and Race It  taking place on the water plus a wealth of local talent from dancers to singers entertaining us from the smaller marquee on land.

A parade of decorated boats sailed up and down during the afternoon representing films such as Peter Pan, Pirates of The Caribbean, Ariel & Dumbo to name but a few.  I made the effort with some Donald and Daisy Duck Tales but was glad I was unable to let the side down, by not being able to cruise without taking everybody else we were tied to with us!  The parade was repeated when darkness fell and magically illuminated by which time we had the best seats in the house with hundreds of folk lining the bank and parkland.  The climax of the festival was the fireworks which left us all ooh-ing and arr-ing.

A boaters breakfast was held on Sunday morning with awards being presented to the prizewinners and every boat being given a commemorative plaque.  It was a lovely festival and I would certainly return again if we are able.

*Welcome to new members Royston and Michelle, n/b Corriander who sensibly paid subs and joined us