At 11.00 am eight narrowboats of the Cotswolds Canal Cruising Club slipped their moorings in Boston, formed up in their pre-determined order in the sea lock, which forms part of the Boston Grand Sluice, and the moment that Sam, the Lockkeeper, opened the gate they were off down the estuary in close line astern, keeping green buoys carefully to the left and red ones to the right closely following the pilot’s instructions. 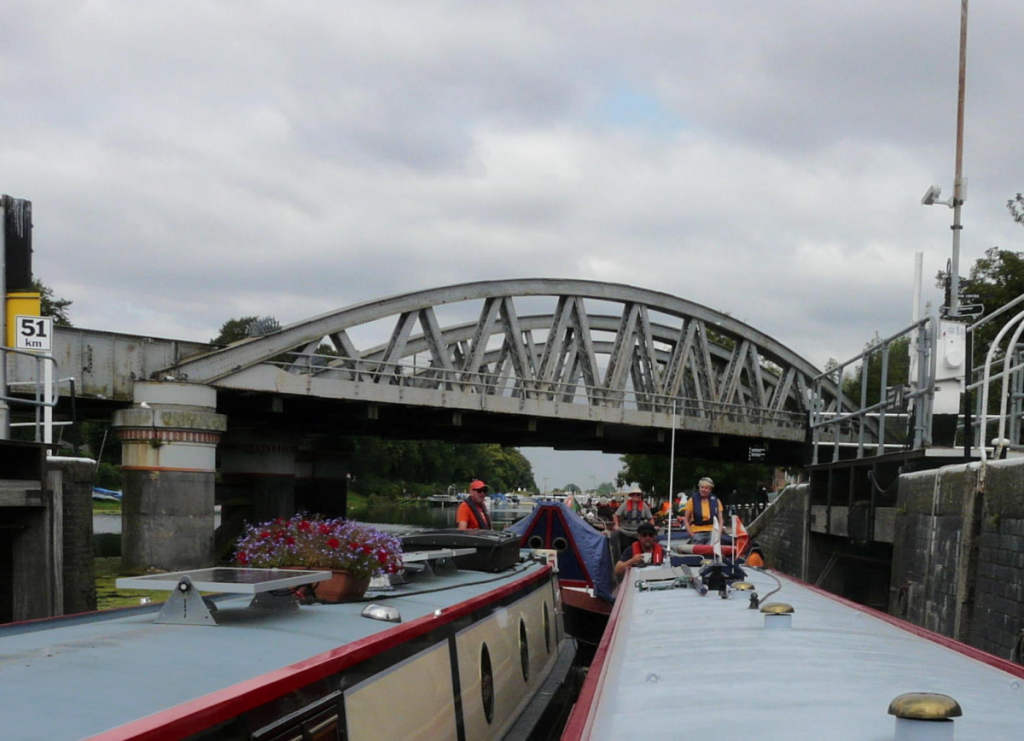 Formed up at Boston

This was the culmination of months of planning.  Several other groups and organisations that had already made the crossing were contacted for advice, and in January a visit was made to Boston to “interrogate” the lockkeepers (always the best source of information!).  Boats over 44 ft. can only pass through the lock when the tidal water in the estuary “makes a level” with the waters of the River Witham allowing the gates to be opened, for a very short time, at both ends simultaneously.  This in turn is only possible around spring tides, when High Water reaches a sufficient level.   Added to this is the boaters’ need to depart Boston sufficiently early in the day for a crossing to Wisbech to be completed in good daylight. 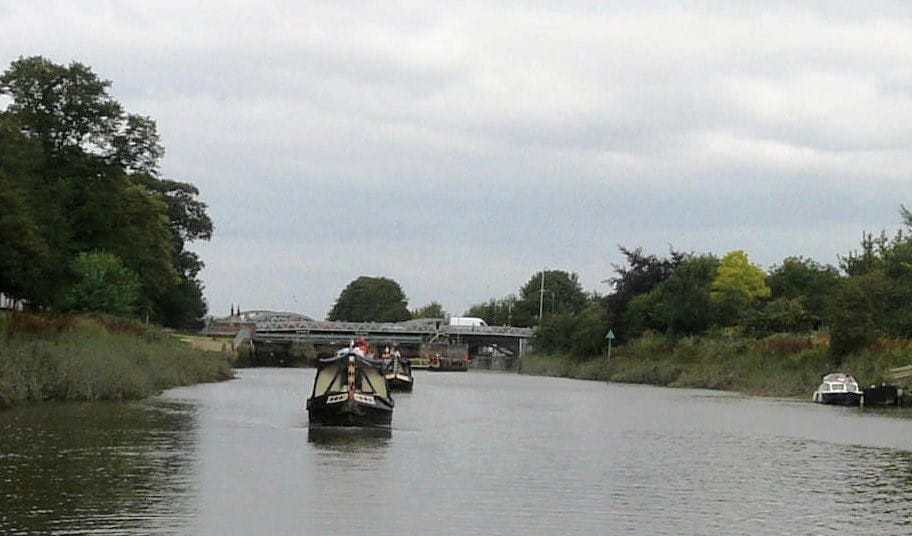 Boston tide tables show small groups of dates in July and August, two to six days in length, when these conditions might be expected. After further discussions with both the recommended pilot and the lockkeepers, club members voted at the planning meeting in February to aim at Friday 25th July. This was the first day of a group of six suitable tides, giving us the maximum opportunity of fair weather.   In the event this was a fortunate choice.  From the 25th onward the sun shone both sides of the hedges, but high winds and other complications caused the pilot to defer departure from one day to the next.  Crews shopped, drank, ate, checked out Wetherspoons’ facilities at Skegness, Boston  and Spalding, took in the famous country show at Heckington, fished, sunbathed on the pontoon and were forced to party at Pimms O’Clock every evening. 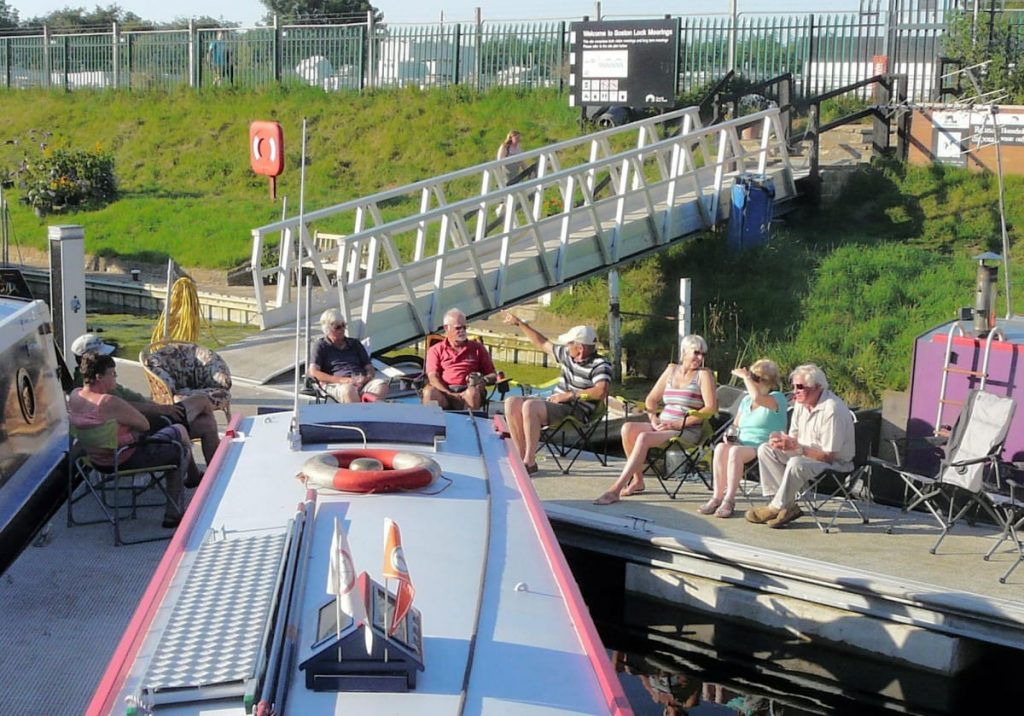 On the Monday a start was made into the lock, but only to face a cancellation and a return to the moorings; our orange tee shirts occasioning comments of “the Orange Tops are back again” obviously our prolonged stay had not gone unnoticed by the Bostonians. 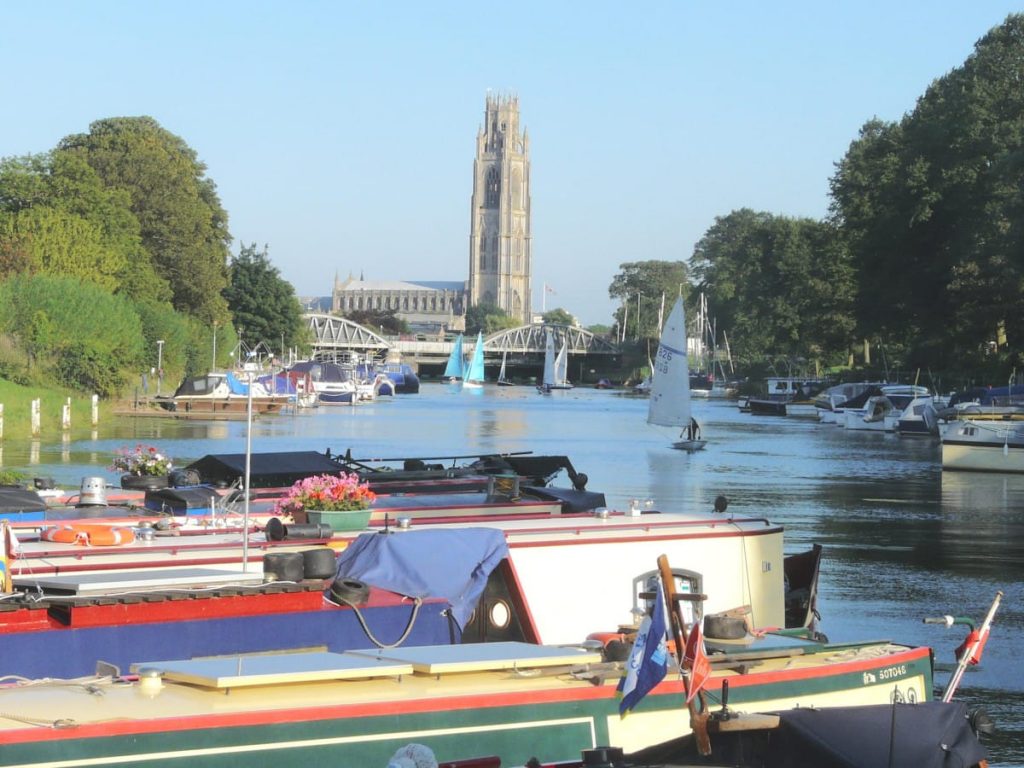 Moored at “the stump”

On Wednesday it all happened and we finally got the go-ahead, by then carrying a pilot and two assistant pilots evenly positioned throughout the convoy.  By one o’clock the little flotilla had finished its northward run up the marked channel of the Boston Deep, rounded the last of the red buoys and was headed south in open sea. The sun broke through, the boats rolled gently in the light swell, the radios burst into chit chat and all was well.

Nothing had quite prepared us for this: neither the expedition into the Thames Estuary nor the recent run down the Mersey.  For an hour or two boats were released from their planned formation and free to spread out a little to relax.  The weather could not have been kinder. As the coastline to the south and east of us began to take shape the pilot ushered crews back into their positions in four pre-planned pairs (roughly equal sized boats in case of rafting up). The next stage of the operation was the beaching on a sandbank.  This is a recognized alternative to riding out the time tied to a buoy while the tide changes enough for the run into the River Nene.  Quite possibly it was seen by many as the main object of the day!   Within a short time all eight boats had grounded a few feet up onto the chosen stretch of sand (uncomfortably close to an RAF bombing range – in use!), crews were ashore walking anchors out in front, deck chairs were set up, tables appeared, jugs of Pimms, bowls of eats and, yes, the palm tree was up. No desert island is complete without a palm tree.  One group sat down to a full meal.  Only the umbrella was missing – for which Mr. Pimms will never be forgiven. Far too soon the tide came in. Crews scrambled to get everything back on board, just managing to recover the palm tree (a palm tree floating in The Wash might constitute a Danger to Shipping), and to  manoeuver boats slowly back into position heading back out towards the lines of buoys. Once back in the fairway speed increased rapidly, the flood tide had clearly set in. Winding at speed between the sandbanks, this time keeping red buoys to our left and green to the right, the lead pair quickly lost position with number two finding it better to fall in behind number one, and those behind following suit. Within minutes the group had dissolved into a long line of eight, with those at the rear finding it hard not to swing wide on the tight bends.  From the front the picture became worrying for a while but with a few sharp words from the pilot and help from his man at the rear, boats were carefully eased back into a tighter formation and kept closer to the required line. An hour of concentration on the part of the steerers and the twin towers at the mouth of the Nene were sliding past us. From there to Wisbech is another hour of dead straight running between high banks, a marked but possibly welcome change from the previous hours. 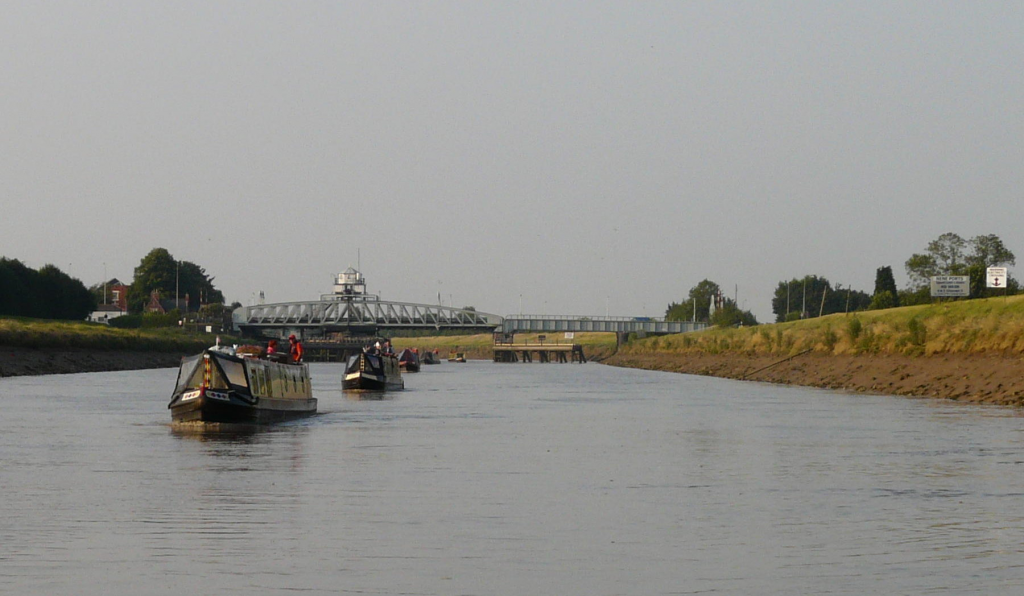 The warm summer evening and the glow of a sunset as eight narrowboats in a dead straight line streamed in towards Wisbech presented an unusual scene for the several bankside photographers. The Four C’s have crossed The Wash.

Postscript:  More pictures and a further account can be seen in Yvonne Olver’s blog here